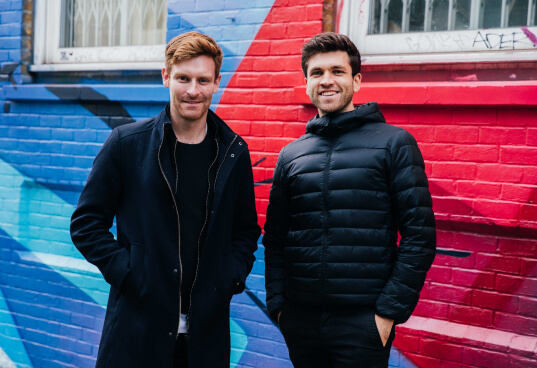 Rubber? Cock sock? Love glove? Whatever you call condoms, you’re not alone if you’re having trouble staying hard when using a condom.

Almost half (43%) of men aged 18 to 60  are struggling with erectile dysfunction (ED), and one study shows up to a third of men experience erection problems when using condoms.

That’s a lot of men struggling to get it up.

It’s not easy to talk about condom associated erection problems (CAEP). The good news is, we’re working to change that, and Mojo’s team of sex experts are here to help you stay hard when using a condom.

Condom collapse syndrome is an informal name for CAEP. This is when someone goes soft before, during, or after putting on a condom.

We spoke to our in-house Psychosexual and Relationship Therapist, Amanda Barge who explained how there is often a fine line between excitement and anxiety:

“It’s a very common occurrence. You’re opening a slippery packet, perhaps in the dark, maybe feeling nervous… all these thoughts produce anxiety in the body.

So, as you’re trying to get the condom on your penis, your fight or flight instinct kicks in, you’re more likely to be losing an erection, and this makes the whole thing much more difficult."

Do condoms cause erectile dysfunction?

While there’s no scientific evidence to confirm that condoms directly cause erectile dysfunction, we do know that condoms can trigger a number of physical and psychological issues, which can then indirectly lead to ED.

Read on to find out more.

Erection issues with condoms: why do condoms make you go limp?

It could be down to bodily causes, mental causes, or in a lot of cases, a mixture of both.

Physical reasons for erection issues with condoms could include:

“Occasionally, men think it’s to do with an allergy to rubber, but this wouldn't really cause the erection to go down.

If they are fit, active, not overweight, not drinking excessively, smoking, taking recreational drugs, or have a medical condition, then it is most likely to be a psychological issue (but it’s always worth checking with a health professional if you have any doubts).”

Psychological reasons for erection issues with condoms might be:

When these things get in your head, your brain isn’t sending the right seductive signals to your penis. This can stop you from getting it up, and eventually impact your experience with using condoms.

Physical and psychological factors can feed into each other.

For example, if you have previously gone soft using a condom that was the wrong size for you, you might now associate condom use with ED, and feel more stressed about it.

“Men who have experienced CAEP have almost given themselves a fright, and sometimes it can feel a bit traumatic.

The Mojo videos are helpful to begin to realize that it is often a psychological issue.”

Mojo’s app will you help have great sex if condoms make you go soft.

How to stay hard with a condom

Can’t keep your erections with a condom? The first step is to figure out why you may be struggling.

Once you’ve worked that out, read our top tips to learn how to put a condom on without going soft, and how to stay hard with a condom.

A few things you can do that might help you physically are:

There are also answers for the psychological barriers to maintaining erections with condoms, such as:

"Using condoms is something that can create anxiety for me. I find them so fiddly and annoying. One thing that can help is turning condoms into a bit of a game. Speaking openly with a partner, explaining that it can be an issue, and finding fun ways for them or you to put condoms on, can change the way you look at condoms. It makes it exciting rather than fear-inducing!"

All these things can help you get in the right frame of mind to mentally overcome the difficulties you have staying hard with a condom, but practice and find the right conditions that work for you personally.

Take it from us, sex with condoms can feel incredible.

Discover expert-led exercises, as well as bite-sized information on erections and other psychological sexual issues by signing up to Mojo’s trial. We even have a dedicated section on condom anxiety.

You can also hear from other guys who have had issues with condoms, and read what has helped them on Mojo’s Community Forum.

Can you put on a condom when soft?

“Toy around with the idea of not disregarding the condom totally but saying, okay, let's play around and not go to penetration – then it won't matter, and your mind will feel relaxed. It's not a failure.”

Can condoms help with erectile dysfunction?

While they may not necessarily help with ED directly, condoms can be great for other sexual issues.

“You don't often hear many men saying they enjoy using condoms. However, if men have premature ejaculation, sometimes specialist  condoms can help them last longer in bed.”

Other causes of ED

Although some guys blame condoms for their erection problems, your ED experience might have nothing to do with wearing them.

Read our blog post to understand other ED causes, and help rule out anything else that could be getting in the way of you and your best sex life.

Penises are all different shapes and sizes, so it makes sense that not all condoms work well for everyone. Here’s some top tips:

Why can’t my partner stay hard with a condom?

Your partner may love how you are in bed and find you incredibly attractive, and still struggle with condoms and ED. So, try not to blame yourself or jump to conclusions.

Regardless, experiencing erection issues because of condoms can affect your sex life or relationships. Communication, understanding, and empathy are good moves if your partner is struggling to maintain erections with a condom.

“Maybe talk about it before you're in bed or before launching into it. Encourage communication, reassure them that it doesn't matter, that you want to be involved, and talk through what happens if the erection is lost.

Men can lose erections and get them back, and that's often an important exercise therapists do with them.”

And the condom may not be to blame at all. Read this post which explains some of the other reasons why your partner is struggling to get it up (and what to do about it).

What if my partner won't use condoms?

If your sexual partner is avoiding condoms, or telling you that they don’t like using condoms, consider vocalizing that:

“It’s important to be persistent with a condom. Even if it fills your partner with dread.”

The moral of the story

When it comes to sex, stay safe but have fun with it.

Our supportive Community and expert-led content can help you get better erections day by day.

Give it a try by clicking here (you can thank us later).

Mojo’s app will you help have great sex if condoms make you go soft.

Do you struggle with condom associated erection problems (CAEP) or condom collapse syndrome (CCS)? Why do you think condoms cause issues for you? What has helped you get and stay hard when using condoms?