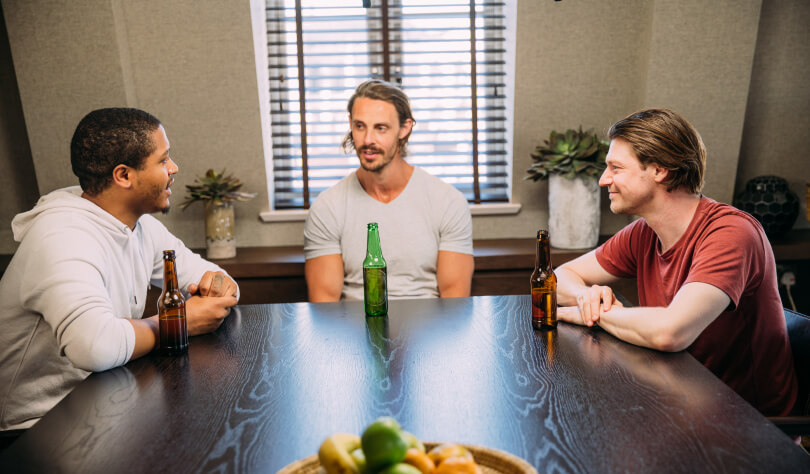 When our founders started struggling with erectile dysfunction (ED), they couldn’t find a rundown of all the things that could be causing it in one place.

So we thought: “why not do it ourselves?” and put together a pretty comprehensive list of the most common erectile dysfunction causes below.

But first, let’s start with the basics: understanding how you get an erection in the first place.

How do erections work? It’s a chain reaction

When your erections come easily, this is what’s going on:

You may have already guessed that anything that gets in the way of these steps can trigger ED.

Let’s unpack those physical and psychological barriers. You will start to see how they mirror our 30-second biology lesson above.

Common causes of psychological ED include:

Our expert, Kate Moyle, will tell you that every man who has had trouble getting it up will have something psychological about their problem, even if it’s just a contributing factor.

“Once you’ve had any reason to doubt your erections, negative thoughts can creep in. These can wreck your chances of getting hard, even if the initial cause of your ED has gone. It becomes a self fulfilling prophecy.”

Conditions that affect blood flow and circulation to the penis

Blood flow can be impacted by vascular conditions (ones that affect the blood vessels).

These vascular conditions have all been recognised as common causes of erectile dysfunction:

“If the blood supply to the penis becomes blocked, or the pathways that carry the blood get too narrow, it can be difficult, or even impossible, to get an erection.”

Problems with the nervous system

If the nerves responsible for sending messages downstairs become damaged, your penis can’t get hard. It literally didn’t get the memo.

Before you read on, bear in mind that most of these conditions are extremely rare (especially in younger men).

These central nervous system conditions are often associated with ED:

Our hormones act as chemical messengers in the body. It’s their job to pass information from one set of cells to another.

Hormones play an important role in both wanting sex and being able to have it.

Typical hormonal imbalances that can cause ED:

Some of the following medications can cause ED in some people (ready yourself for a lot of big words):

“If you think your medications are causing sexual problems, sometimes alternatives can be found that don’t have these side effects. Chat to your doctor to discuss your options.

It’s also important not to change or come off any planned medication before getting their advice.”

It’s no secret that drugs and drink can lower inhibitions and fuel sex. However, they can also pave the way for erection problems.

They both alter the way your mind and body works, which can lead to temporary or longer-lasting bouts of ED.

Alcohol can make you feel hornier, but it slows the messaging down, and can have a numbing effect on the penis, making it harder to get an erection in the moment. Heavy drinking over time can do more lasting damage too – making ED more likely.

Recreational drugs include both  party drugs and medications when they’re used to get high, including:

Periods of psychological and physical stress can put you under more pressure than you realise.

Your body may well de-prioritise sex until things feel calmer during these times:

Although the chance of ED does increase with age due to the growing risk of vascular conditions, it’s by no means guaranteed.

Likewise, psychological ED is widely considered a leading cause of ED in young males.

But we’ve met lots of men of all ages whose experience with ED isn’t so easy to categorise.

The truth is, ED can impact you at any age (one study found 26% of men under 40 were impacted by ED) for all the reasons we list here.

But you can do things to minimise the risks.

And finally, phimosis and ED

Some men encounter ED when the foreskin is too tight to be pulled over the head of the penis. This is known as phimosis.

Phew! We got to the end

We covered a lot here, and maybe some of it struck a chord.

If you’re getting that “sounds a lot like me” feeling, you can find out more by:

Mojo is a safe space where guys can talk openly and anonymously about sexual issues and get expert help to reclaim their erections.

Solve your erection issues for good

Want a free membership? Test out a brand new version of Mojo and we’ll thank you with 3 months completely free. Sign up here.